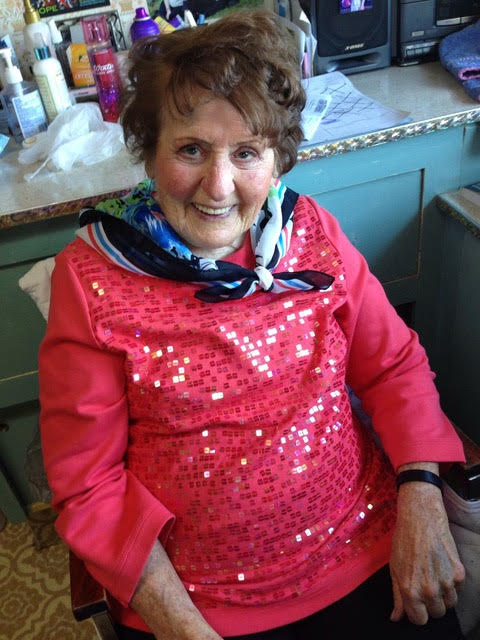 Hazel McGill passed away peacefully at her home on May 3, 2017, after a long and fruitful life. The eldest of six children, she was born to Edwin and Florence Severson on June 2, 1920, in Omaha, Nebraska, while the family was traveling. The Seversons resided in Crowder, Oklahoma, until Hazel was a teenager, then moved to Harrisburg, Oregon, where Hazel attended and graduated from Harrisburg High School in 1937.

Hazel’s father, Ed, was a traveling minister for the Church of God (Seventh Day). An accomplished and self-taught pianist, Hazel would often accompany her father on his many trips around the US, playing piano for the services.

Hazel met Leroy McGill at a church function in Harrisburg, Oregon, and they eventually married May 15, 1941. Coincidentally, the McGill family had also moved from Oklahoma to Oregon, settling just a few miles south of Harrisburg in Junction City. Despite having lived only about 25 miles from each other in Oklahoma, Leroy and Hazel had never met until they were both residing in Oregon.

Leroy and his twin brother, Deroy, purchased a farm near Marion in the late 1930s. Leroy and Hazel lived in the old farm house on the property until they saved enough money to build a new house in 1952, which became their residence for the remainder of their lives. In the fall of 1952 they welcomed Lyndon and then Delwin in the spring of 1955.

Hazel was never intimidated by hard work. Even after spending long hours in the fields, she still found time to maintain a beautiful yard and bountiful garden. She also worked evenings to build a successful business with a vitamin company and was awarded a free car. Although Hazel was often criticized and dubbed a «health food nut» due to her strong beliefs in good nutrition and a healthy lifestyle, her principles served her well and she outlived many of her critics. She was a great asset to her family and society, and will be greatly missed.

Hazel was preceded in death by her parents, her husband of 72 years, her sister, Blanche (Miller), and brothers Leo and Clarence. She is survived by her sisters Violet Warner and Norma Jean Warner (Norman), sons Lyndon (Tami) and Del (Denise), six grandchildren, and nine great-grandchildren.