The North American Ministerial Council (NAMC) met in Covington, Kentucky, October 10-15. We are grateful to the pastors, licensed and credentialed ministers, and observers who gathered and to all who made this meeting possible.

The council took the following actions:

• Elected the following members to a two-year term on the Nominations Committee: Eddie Villalba, Santiago Chavez, and Brian Franks.

One of many emotive times during council was the “Pastoral Appreciation Moment.” We remembered twenty-two pastors who now sleep in the Lord, as well as the service of forty credentialed ministers and ninety-four licensed ministers. We also recognized twenty-seven certified local pastors and one hundred and twenty-four local leaders.

Thanks to all women, including pastors’ spouses, who attended this event. They gathered every day to hear the Word of God and pray together.

We experienced a wonderful time of fellowship, worship, and instruction in God’s Word, reminding us that we should be imitators of God (Ephesians 5:1). Let us closely follow Jesus every day (Matthew 16:24). Let us be a church that thinks like Jesus, speaks like Jesus, teaches like Jesus, preaches the gospel like Jesus, has compassion like Jesus, suffers like Jesus. Let us be an example in everything so we can say with a clear conscience, “Follow my example, as I follow the example of Christ” (1 Corinthians 11:1, NKJV). 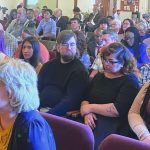