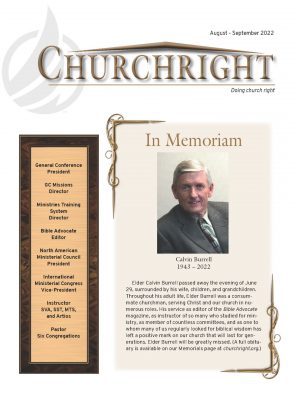 James married Barbara Eubanks on September 5, 1956. They got married while still in high school and were happily married for over 65 years.

James served in the army from 1958 to 1960 as part of the 2nd Armored Division. Most of his service took place in Germany as a head mechanic working on tanks and large trucks during the building of the Berlin Wall.

The Church of God (Seventh Day) was the Taylors’ church for all James’ married life. He was the head elder of the Marion, Iowa church, helping the pastor and leading the church when there was no pastor. In 1985 he and Barbara were instrumental in helping found the Springfield CoG7. In 1993 James became the pastor of the church, serving for 18 years. He was always referred to affectionately as Pastor T.

In addition to being a pastor, James was a machinist. He worked in job shops, both in Iowa and Missouri, and could fix just about anything. He received a machinist certification from Kirkwood Community College in Cedar Rapids, Iowa, and excelled in math.

One of James’ hobbies was singing, which he often did for church. He would always joke that he was James Taylor, the singer.

James loved to play golf with his sons, admitting that he wasn’t real good, but he loved being with his sons. He loved westerns, especially John Wayne, rooting for the Cardinals, listening to gospel music and reading history. He took his family on vacation every year, which provided a volume of great stories.

August 2, 2022
Advertisement. Spring Vale Christian School is not a ministry of the General Conference. At this writing, GC Convention 2023 is about one year away. Are you making your plans? July 10-15 will be a week filled with blessings, good fellowship, God-inspired sermons and workshops, and lots of worship. There are activities for all age groups. The week features a fun, educational children’s program; energetic, inspiring youth activities; encouraging, inspiring young adult activities; and opportunities for adults to be involved in the business of the Church and spiritual growth experiences. All attendees will come together in the evening for a large corporate gathering. We would love to see you there!

As in previous years, several hotel options will be available. Nightly costs range from $119 to $140. These are special convention rates and are not available on general hotel websites. The hotels will prepare a special convention website for reserving your rooms. Your willingness to reserve a room in the convention block greatly reduces the costs of meeting space in the hotels and Convention Center. More details will be released in late 2022 or early 2023.

Hopefully, this will help you plan for GC Convention 2023. Start saving so you can join us in Covington, Kentucky. And don’t forget to come early so you can visit the Ark Encounter with friends and family. It will be worth it!

Special note: The Planning Committee needs your assistance in identifying someone to coordinate a nursery program, including planning activities and recruiting volunteer assistants. If you or someone you know would be interested, please contact Mary Jean Knoll (knoll5853@comcast.net).

Calvin married Barbara Ann Mann on May 29, 1966. They have three daughters: Debra Arlene, Darla Sue, and Donna May. After receiving a BA in teaching from Northwestern Teachers College in Alva, Oklahoma, Calvin earned a master of religion degree from Bethany Nazarene College. He was president of the General Conference of the Church of God (Seventh Day); editor of the Bible Advocate (the Church’s magazine); president of the International Ministerial Congress; and director of Missions Abroad. He also taught at Summit School of Theology, LifeSpring, and Artios.

In addition to these positions, Calvin was a teacher and principal at Spring Vale Academy and pastored churches in Fort Smith, Arkansas; Shawnee, Oklahoma; Denver, Colorado; and Houston, Texas. He was a published author, served on countless boards and advisory committees, and did so much more. He enjoyed serving the Lord in many capacities.

Calvin loved preaching and teaching, mission work, editing, as well as ministering to whomever came in his path. His love for the Lord showed in his interactions with others, whether family, friend, or stranger.

Calvin also loved the outdoors; hiking was what he liked best. He took on all 54 of the 14,000-foot mountains in Colorado and many in other states. He enjoyed golfing and sightseeing throughout the United States and other countries.

Celebration of Life will be Sunday, July 10, at 2:00 p.m. (Pacific Daylight Time) at Marion Church of God (Seventh Day), 7478 Stayton Road SE, Turner, OR 97392. It will also be live streamed through YouTube channel MarionCoG7.

On April 30, 131 people from the Chicago-area churches met at the Addison church to learn how to share Jesus Christ with “pre-Christians.” Elders Mike Vlad and Larry Zaragoza led this day-long seminar on personal evangelism as part of the General Conference’s “Come and See” evangelism initiative. The Chicago-area women’s group held its revival meeting at the Calumet City church on May 8. Guest speaker Jochebeth Martinez is the Women’s Ministry leader for the General Conference in Mexico. With the theme based on Luke 10:38-42, the day was filled with many activities, plays, sermons, and special prayers. This event was prefaced by a Zoom call on the same topic earlier in the week and during an all-day Sabbath service, allowing many women to benefit from Sister Jochebeth’s visit.

On June 25, the Church of God in Petersburg, MI, hosted an all-day seminar, presented by Elder Whaid Rose. The Fort Wayne, IN; Holland, MI; Moundsville, WV; and Saginaw, MI churches were represented. Elder Rose said that the world is hungry for smaller churches that offer a small, loving community. We are to share the hope of Jesus in this broken world. Thank you, Elder Rose and Petersburg CoG7! The “Grateful to God” service was held in Fort Wayne, Indiana, at the Lafayette Street church on June 17-18. Guests arrived from the Bowser Avenue church, along with visitors from Ohio and Michigan. The entire service was filled with gratitude to God, who has allowed the Lafayette Street congregation to pay off their mortgage. They are now the proud owners of their own church building and property!

A short history, shared through testimonies and videos, began on Friday evening and continued throughout Sabbath day. We enjoyed hearing what God has done, even through the many rentals, struggles, obstacles, and uncertainties. To God be the glory for all He has done! Many praises in song and prayers were dedicated to the Lord.

A Lord’s Prayer wall hanging was presented to this congregation from the Northeast District in recognition for all they have done and as a reminder that God will continue to prevail.

God is good. And this service truly showed evidence of “all the time”!

The Lafayette Street church hosted Minister Rex Miller on April 23 to preach during the morning service. In the afternoon, Bowser Avenue joined the gathering and led praise and worship. Brother Rex spoke a powerful message about God’s Word and His empowerment to do His will. Congratulations to our new church in Lake Worth, FL! Formerly in West Palm Beach, it moved several months ago when a building was purchased. Co-pastored by Brothers Margarito and Jose Perez, the church has approximately 150 members and visitors who attend weekly. All of us in the Southeast District wish them continued success and growth! On May 14, our sister church, New Hope United, celebrated ten years of God’s grace in their midst. The congregation enjoyed a blessed service and message, as well as a time of fellowship. We praise the Lord for His faithfulness!

More than 100 young adults gathered at the CoG7 Truevine in Austin, TX, on May 21. During the day, the young adults learned about the joy they can find in such areas as evangelism, finances, fellowship, relationships, and worship. The day was full of activities, games, and most important, God’s presence.

On May 22, the Area 1 pastors and leaders gathered in at the CoG7 Piedra Angular. Pastors and leaders were introduced to the GC Initiatives. Virtually and in person, different speakers went over their needs, requirements, and resources. Superintendent Chip Hinds encouraged the pastors to be intentional in their calling and edify the Church. After the meeting, the congregation provided lunch to the participants.

The SWD Senior Ministry held its first meeting on May 29 at the CoG7 Ceralvo in San Antonio. More than 40 seniors gathered to praise the Lord, enjoy fellowship, and delight in God’s Word. Pastor Thomas Childers encourage them to continue bearing fruit in this stage of their lives. Sister Merari Teran talked about the importance of good health, touching on social, physical, and mental areas. Afterward, seniors could paint, do crafts, or just socialize and play games. It was a great opportunity for them to feel loved and encouraged by the Church. At Area 1 ‘s first Super Sabbath of the year, held June 17-18, 470 brethren gathered in Dallas to worship our Lord. Using the theme “The Great Commission,” Pedro and Moises Capetillo and Daniel Flores encouraged the brethren to be a friendly church that shares the gospel. Superintendent Chip Hinds attended, as well as Brian Baker, director of the Orphans and Widows ministry. Brethren were also honored with the presence of Brother Robert Coulter, founder of the International Ministerial Congress. In each service, churches in this area ushered us into the presence of God. We are thankful to Him for allowing us to have this Super Sabbath for His honor and glory.

On June 19, 52 pastors and leaders of Area 1 gathered for a leadership meeting at the North Dallas church. During the training, Elder Daniel Flores and Pastor Ramon Ruiz preached the Word of God, emphasizing the importance of family groups. Superintendent Chip Hinds also encouraged attendees to continue moving forward.

Two hundred brethren from all over our district, and outside it, gathered June 12-19 in Dover, Oklahoma, to enjoy a week of worship, fellowship, and friendships. The theme of this year’s camp was “Walking Free.”

During the week, brethren heard eleven speakers. Among them was Superintendent Chip Hinds, whose messages revolved around the camp theme, as well as our GC initiatives in evangelism. “Come and See” workshops were led by Daniel Flores, Moises Capetillo, and Pete Capetillo.

The children visited Science Museum of Oklahoma, and youth had a great time at the Frontier City Amusement Park. On Sabbath, Pastor Barry Mauldin recited and preached on the Sermon on the Mount. The celebration continued with several specials, the children’s program, consecration of programs, and most important, memories and friendships.

We thank God for everyone who made this year’s camp possible under the leadership of brother Jerad Ullrich and his wife, Heather.