Elden Fischer (84) of Perry, Michigan, passed away May 26 at Memorial Healthcare in Owosso after a battle with COVID-19. Elden was born in Eureka, South Dakota, on November 7, 1935, to Fred F. and Esther (Schrenk) Fischer. Having lost a sister before his birth, he grew up the oldest of three children. Elden graduated from Eureka High School in 1954, then graduated from Northern State Teachers College in 1958. He served his country at Kansas University Medical center in Kansas City as a conscientious objector until 1960. During this service time, in 1959, he married his love-for-a-lifetime, Cecyl (Caswell) in Stanberry, Missouri. They celebrated 61 years of marriage just two days before his passing.

Awarded a grant for one academic year toward graduate work through the National Science Foundation, Elden moved his family of four to Corvallis, Oregon, to finish his master’s degree at Oregon State University. He taught one year of junior high in Junction City, Oregon. before moving to Owosso to teach at Spring Vale Academy (now Spring Vale Christian School).

At Spring Vale, Elden held titles at various times as science teacher, principal, director, supervisor, and eventually a board of directors member. After he left his employment at the school, he remained a pillar of the school community as a personal basketball coach (unofficial), friend, mentor, and encourager of students and staff. Elden brought his experience with the Church of God (Seventh Day) National Youth Agency to his role as Sabbath school superintendent. He will be long remembered for the energy and creativity he poured into the opening program at church. His trademark was innovative object lessons or sometimes a play on words that would help one remember a theme of God’s love throughout the next week.

Elden went on to teach chemistry at Lansing Community College while pursuing a career in real estate.

Elden was an avid sports enthusiast. He was loyal to the Michigan State Spartans (Cecyl’s alma mater), the Detroit Tigers and Lions, and the Spring Vale Flames. He was a regular at the MSU women’s volleyball and basketball, and often shared that experience with Spring Vale students as they were available.

The passion of Elden’s life was sharing the gospel of Jesus Christ. He was a daily Bible reader and showed up at God’s house for whatever was taking place, be it church service or fellowship. He appreciated the way that the laws of science confirmed his belief in the Creator God.

Elden loved people and truly wanted the best for all of them. He saw people as God’s creation and appreciated them for who they were. He was trustworthy, honest, funny, unique, caring, dedicated, and loyal. Elden will best be remembered by the people whose lives he touched along his life’s path. 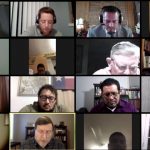