Paul Heavilin was born March 15, 1927, in Marion, Indiana, child number eight of fifteen born to McClellan and Vera (Foster) Heavilin. He slipped peacefully from this life on March 29, 2020, in Waldron, Indiana, fulfilling one goal: making it to 93 years just like his oldest brother, George. His wife, Virginia, and daughter Marilyn were by his side.

Learning to be a dedicated, hard worker from his father, Paul was a contractor during the Depression, and it served him well over the years. Although his primary professions were teaching and preaching, he worked in multiple jobs: produce manager and grocery store clerk, construction, printer and instructor of printing, craftsman of specialty and educational toys for the handicapped, school maintenance — to name a few. He considered himself to be a “jack of all trades,” often adding, “and master of none,” with his signature laugh!

Paul taught school in the public arena in several locations for fourteen years. He retired from the Shiawassee Regional Education District in 1991 to return to his greatest love and passion: serving God and His church.

After earning his first bachelor’s degree, Paul began his ministry pastoring two years in Wisconsin for the Wesleyan Methodists. At that point in 1952, with three young girls in tow (the youngest less than a week old), he went to Missouri to teach at Midwest Bible College (MBC) for the Church of God (Seventh Day), and Virginia cooked for the students. This set a pattern for the rest of Paul’s life of his wife being a co-partner in his ministry wherever he went.

Over the next 48 years, Paul served the Church of God in multiple places and in multiple roles: pastoring in Wisconsin, California, and Michigan; working as youth camp director, president of MI state board, president of the North American Ministerial Council, and secretary of the International Council; carrying out duties in numerous positions on district, state, and local boards; and last but not least, ministering for fourteen years at Spring Vale Academy (SVA), where he was “Uncle Paul” to many of the students. Between his MBC and SVA teaching years, Paul taught two generations of some of the same families!

Paul was preceded in death by his parents and eleven of his siblings. He is survived by his wife of 71 years, Virginia (Spencer); brothers John and Charles (Barbara); sister Lois (Ben) Drown; his seven children: Martha Ling, Marilyn (Dan) Current, Marietta (John) Luman, Paul Jr. (Jo), Becky (Lee) Larson, Philip (Linda), and Peter (Michelle); a niece and nephew, Carolyn and Ken Clements, he helped raise; nineteen grandchildren, 49 great-grandchildren, and five great-great grandchildren — as well as myriads of nieces and nephews, “kids” from his years of pastoring and teaching, and many who lived in the Heavilin home over the years and are counted as family.

Goodbye, until we meet again in that glorious reunion in the sky! In the meantime, we will cherish the memory of your robust laugh, cheery whistle, one-of-a kind rendition of “Cheer Up, Ye Saints of God,” fifty-mile detours to catch a few minutes with a long lost friend, and bear hugs freely given to all!

Paul is to be buried at Hillcrest Memorial Gardens in Owosso, Michigan. Memorial service information will come at a later date.

Donations on Paul Heavilin’s behalf may be made to Spring Vale Christian School, Owosso, Michigan, or to Dementia Society of America, P.O. Box 600, Doylestown, PA 18901; or donate online at http://www.dementiasociety.org/donate. 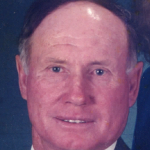