Lucille Maher Hinds (88) was born October 19, 1932, in Muskogee, Oklahoma, the daughter of Clyde Albert and Mattie Etta (DuVall) Maher. She passed away December 23, 2020, due to complications of COVID-19. Primary in Lucille’s life was keeping her priorities in order. For her it was God, family, church, community, business, and the arts. Often those priorities would be manipulated to enhance each other. Her focus was on Jesus Christ and letting Him live visibly to others through her. Loving God and helping others, beginning with family, were her main goals in life. Perhaps the light of Jesus Christ was shining most brightly through her during times of adversity.

For Lucille, her relationship with her Creator came first. All other things, including family, were managed in accordance with her perception of God’s will for her life. She depended upon the Bible for her divine instruction and inspiration, reading it frequently throughout the day. Lucille read the Bible in its entirety almost every year for many years. Her depth of understanding and personal application of God’s Holy Word were remarkable. Her favorite verses were all the “love one another” texts of the New Testament. She especially liked the Psalms and other texts that declare our hope now and eternally in God. The Great Commandment and the Great Commission were tops on her list as well.

Lucille loved her family. She was a mother to one son, one daughter-in-law, three granddaughters, and five great grandchildren. During the 1990s and 2000s, she was also a foster mother to 166 children who needed a mother for a while. Twice, she was named the Cherokee County, Oklahoma Mother of the Year.

Before that, back in the late 1950s – early 1960s, Lucille also took in three community children whose parents were in trouble and cared for them until their home life could be stabilized. To her, nephews and nieces ranked high among her priority family members.

In her 88 years of life, there were very few years when Lucille didn’t have someone in her home she was caring for because of some need in their life. She made sure one homeless man of Tahlequah had a roof over his head for over ten years, even though she could provide him with only a little mobile home.

Lucille loved her extended family and enjoyed doing things for them. Sometimes it was making clothes for nephews or nieces for 4-H or FFA shows. Other times it was making a needlepoint picture; crocheting an afghan, sweater, or doily; embroidering a western shirt; or creating some other work of art. Her goal was to live as part of an organism for the greater good of the whole family.

In the Church, Lucille played the piano, sponsored the youth ministry, served as the treasurer for many years, taught children’s classes, and cleaned the church often. Her goal was to support the pastor, whether it was her father, her brother, or one of her nephews, and to complete ministry goals to achieve the Great Commission of making disciples and fulfilling the Great Commandment of loving God and one another.

Lucille loved her community, staying active in school and community projects. She highly valued her Native American Cherokee heritage and loved the Cherokee Nation. She was one of the founders of the Tahlequah Bread of Life Food Pantry. The Tahlequah Bread of Life consumed much of her energy and resources for almost 30 years, serving more than 3,000 households with more than 2 million pounds of food through one of her former rental properties. She continually gave God thanks for the countless volunteers joining her in the ministry.

Lucille was an industrious woman. Cutting wood with her identical twin sister Louise, hauling hay with her brother, Sonny, and cutting wood with her son to help pay for his college tuition were a few of her sideline activities. She also operated a cow/calf beef operation, a Grade A dairy, and was a landlord for up to seventeen rental units for 35 years. Besides that, Lucille worked for one employer, Griffin Foods, for 41 years. During those years, she made several television commercials for Griffin’s syrup, jams, and jellies. However, most of the time at Griffin she operated a label machine on a high-speed production line for Griffin’s syrup.

In all of that, Lucille still found time to enjoy the finer things in life and be adventurous. The last ten or so years of her life, she traveled an average of 50,000 miles a year. She attended different churches almost every weekend, as well as conventions and conferences, and she enjoyed scenic vistas, mostly expanding her relationships in the adopted family in Christ. This year, of course, was an exception, so she attended no less than fifteen special event functions online in the last six months.

Lucille loved quartet music and was a founding member of a four-part-harmony family group called the Lowerlights. The original members, besides herself (soprano), were her youngest brother, Clyde “Sonny” Maher (bass), youngest sister, Ruby Guinn (soprano), oldest sister, Margaret Guinn (alto), and brother-in-law, J. L. “Junior” Guinn (tenor) on guitar. They sang in churches, at special events, and on the radio, producing music for decades. Music was a key part of Lucille’s life, and she influenced other young people to engage music.

Whether attending a school play, special event, church service, community project, or making something for someone else, it was rare to find Lucille not engaged in some project. Almost always, it was to provide a resource for others or to help them achieve their goals and ambitions or meet a special need. Through her former employees, tenants, volunteers, family, and children, Lucille has provided a legacy and succession of people committed to God and to one another. She lived her life well and has entered a much-deserved rest in Christ Jesus. 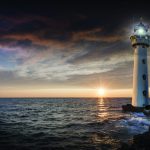