Luella Barnes (91) passed away August 24. She was born September 5, 1928, in Fairview, Oklahoma, to Glenn and Thressa (Cole) Sheffield. She was third in line, following her brothers Leonard and Wesley. Wilma June, Gene, and Ruth soon followed. When Luella was just four years old, she lost her sister, Wilma June.

It was difficult to make a living in Oklahoma due to the Great Depression. Because of this and the Dust Bowl, the Sheffield family left for Oregon in 1937. Luella celebrated her eighth birthday in Nebraska while en route.

In 1947, Luella met her future husband, Milford “Mick” Barnes, after he had been released from a hospital in Billings, Montana. He had been there over a year having suffered injuries in a plane crash on his way home from serving in World War II. Mick was one of three survivors from the crash.

The Barnes family settled in Jefferson, Oregon, to be with other family. Luella’s younger siblings, Willard and Helen, arrived soon after. Today, Helen is the only surviving sibling. She has been more like one of Luella’s kids, as Luella helped raise her. Helen spent a lot of time with Luella’s family after their father died when she was just thirteen.

As a child, Luella was a tomboy, chasing after her brothers. She loved to ride her bike, swim, roller skate, and go to movies. Luella loved crafts of all kinds and was an excellent seamstress, knitter, crocheter, and gardener. She was a great cook and canned fruits and vegetables every summer.

Luella held many jobs over the years. Her first was at age ten, picking green beans in the fields. After she graduated from Jefferson, Oregon, in 1946, she went to work in Salem at The Ink Spot, where she was a typist/bookkeeper/mimeograph operator. She also worked in an elementary school kitchen and would bring home fresh cinnamon rolls for her kids. In her later years, she worked for an optometrist in Albany before retiring in 1988.

A lifelong member of the Church of God (Seventh Day), Luella attended South Albany Community Church for the last two years of her life. She was always involved in church activities and roles, including teaching, Bible studies, secretary/treasurer, and attendance clerk. 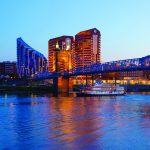