Robert Baker was born July 14, 1932, to his loving parents Samuel Edward and Maude Delacy Baker in Brooklyn, New York. He passed away September 19. He had one brother, Allen, and an Aunt Claris, both deceased.

During his childhood, Robert and his family relocated to Barbados. Upon completion of high school, he and his family moved back to New York. In his quest for higher learning, he attended the school of dentistry and graduated as a dental technologist. However, Robert went on to work as a supervisor of painters with New York City Housing Authority until his Robert met Violet McLean, a beautiful and faithful servant of the Lord, whom he could not resist. They were joined in holy matrimony in 1969, and this love affair spanned 52 years. Together, they raised four beautiful children. Robert was both provider and protector. He loved his children fiercely and gave them the best life possible. He also instilled in them a strong sense of responsibility and the need to focus on the Lord Jesus Christ and family. Robert was just as dedicated to his grandchildren, great-grandchildren, many nephews, nieces, and cousins. He opened not only his heart to them, but his home as well and provided a safe haven for many.

Robert was a man of excellence and possessed a wonderful sense of humor. At one church function, he distributed pencils that had no points on them. Initially it was funny, but it caused one to consider the deeper message: that life without Jesus is pointless. Robert prepared difficult Bible quizzes and seemed to enjoy looking at our faces for expressions of either excitement or sadness. The question was “Did we study his assignments?”

Robert’s greatest love of all was for the Lord God Almighty. He studied the Scriptures daily and prayed fervently. His deep love for the Church brethren was beyond measure, and he served with great joy and enthusiasm. Because of his excellent teaching and preaching ministry, some members became elders, deacons, and wonderful men of God. But even more, Robert was known for his peaceful disposition and Christlike character.

In 1979, a dilapidated building, located at 84 Rogers Avenue in Brooklyn, New York, was purchased for a place of worship. Along with other brethren, Elder Baker worked hard and smart to repair the walls and paint them. He also did a significant amount of carpentry within the edifice. Robert was motivated to ensure that the building became a wonderful place of worship. This was a pleasant experience for all, which resulted in greater respect and love for him.

Robert was a strong supporter of the North American General Conference and attended the biannual conference in various states throughout the US. For several years, he served effectively on the Northeast District board. He remained a faithful member of the Long Island church, where his church family was blessed by his wisdom, intellect, and grace.

He showed a strong work ethic and servanthood that is rarely seen these days. When there was work to be done, he made himself available, whether it was preparing for various functions or preparing for any special needs of the church. Many can recall the colorful, spiritually meaningful banner that he had professionally made. It read “Don’t Be Caught Napping” and was hung across the wall just behind the rostrum. This signage provided a perpetual reminder for us to make sure that our lives are ready for Christ’s coming.

One of Robert’s favorite verses was Psalms 50:10: “For every beast of the forest is mine, and the cattle upon a thousand hills.” In other words, he would remind us, “Don’t worry for a thing. The Lord will provide.”

In 1999, Elder Robert Baker relocated to Florida where he continued to serve in the Church of God (Seventh Day). A few years ago, he became ill, and his body began to decline. He was tirelessly cared for by the love of his life, Violet, who ensured that all his needs were always met. In his sickness, Robert constantly sang, quoted Bible verses, and prayed with his wife. In fact, the last hymn they sang together was “Pass Me Not O Gentle Savior.” 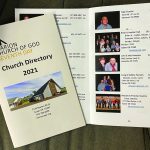