The Fort Wayne Women’s Retreat took place January 21-23, but we weren’t sure if it would. With absences and the virus still active, we became a little concerned how the event would proceed. One great lesson we learned was that God had His hand on this retreat from the beginning of the planning, and it would be completed.

Our gathering did take place, and God’s faithfulness surely showed up!

The air was breezy and cold, but as the women began arriving with their warm hearts, no one remembered or cared how cold the weather was. With energy, anticipation, and excitement, 36 women deboarded their chartered bus after a twelve-hour drive from Ossining, New York; Edison, New Jersey; and Bridgeport, Connecticut. They arrived tired but excited. Even amid COVID and masks, the hugs and welcomes filled the room.

By 4:00 p.m. on Friday, we were almost to our number of registrations. New friends were being made, and old acquaintances were reunited. Considering everything going on in the world and continuing to fight the pandemic, one could tell that this retreat would be a huge blessing. The Enemy created obstacles, but as always, God persevered. Others replaced those who were absent. The retreat theme was “1 John 4:11: ‘What Part Don’t You Understand?’” Sister Stacey Rodriguez got the ladies up and moving with “get to know” questions and prizes. The praise team opened the service and set the stage for the opening message of “Lovest Thou Me?” by Sister Esther Winchell. The women then broke into groups for prayer.

Sabbath morning began with morning prayer, led by Sister Becky Hernandez. She also presented the morning message, “Jesus Loves You.” Cookies shaped in the letters L, O, V, and E were lovingly made by Sister Melissa Chrznanowski. Each lady was given one cookie, and she had to find three other women with different letters to spell Love. Those four ladies then formed a prayer group. It was a busy but Spirit-filled Sabbath morning.

After lunch, the ladies enjoyed “me time” to rest and reflect on what the weekend was all about. Later, Sister Sonia Monge brought the message on how to apply the love of Jesus to our sisterhood. We cannot say we love the Lord if we cannot even love the sister who is right before us. Lesson well spoken!

Sisters Marion Noble, Bethany Coulson, Sarah Newton, and Missy Smith led praise and worship Sabbath afternoon, and they “rocked” the room. There was no language barrier as the ladies sang with their entire hearts! By the closing song, everyone had learned some new songs, and faces were radiant with God’s love.

The dining hall was decorated with white chocolate pinatas on the tables for dinner. Sisters entered with their evening gowns and dresses. The privilege of breaking the pinata was given to the oldest sister at the table, and all enjoyed the goodies inside.

Many young women attended the retreat. It was encouraging to see them seek to be mentored and serve where they could. God bless their young hearts! Our youngest little sister, thirteen years old, entered into the activities.

Sunday morning brought us some good Northeast weather, with blowing and drifting snow. Those traveling distances decided to leave before the roads got worse, cutting the group down to about forty for our closing service. That did not stop God’s Spirit from filling the room. Sister Jacquelyn Scott closed with her testimony and song of God’s love. Information about Love for the Stranger and the ministry of Healthy Minds-Healthy Churches was shared with attendees.

The closing service was awesome with hugs and smiles. As the rest of us began to leave, God brought out the sun, melting the snow and clearing the roads. Praise the Lord!

As we cleared the retreat center, we realized that we hadn’t known about the GC’s plan for our 2022 quarterlies, but we definitely experienced firsthand being “Witnesses.” Eight women, first-time retreaters, were not members of CoG7. The comments from them were nothing but uplifting, proving that these events plant the seed in others. They also show firsthand the joy of serving a loving God and the joy that can be found in Him.

Some of the comments: “You all treat one another like a true sister.” “So much love in this room and it feels real.” “Thank you for the invitation to come and experience Jesus.” No negative comments were heard, only desires to return to another retreat and requesting dates for the next one!

This was the Fort Wayne church’s first retreat and, God willing, will not be their last. We were spiritually filled and reminded of God’s love for His daughters — from the date of signing the contract to the last vehicle leaving the retreat center!

“What Part Don’t You Understand?” The message was loud and clear this weekend. Everyone left knowing love is action, love is believing, and love is faith. But most of all, God is love! 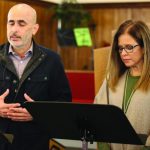