The Fairview, Oklahoma Church of God (Seventh Day) has a unique history. It was the first Church of God (Seventh Day) organized in the state of Oklahoma and dates its beginning back before statehood when Oklahoma, then Indian territory, was opened for settlement. At that time, Church of God families from Kansas made the run to stake a claim on which to establish a home. The opening of the Cherokee Strip on September17, 1893, brought settlers from all over the world to this area. The Wells families actually waited and made the run the next day, since September 17 was a Saturday. Because of their dedication to Bible truths and the Sabbath, several other early families became interested in their beliefs and began meeting with them.

By the spring of 1894, Bible studies were moved from covered wagons, sod homes, and dugouts to a sod schoolhouse west of Fairview. For many years the church met in the Golden Valley School, two miles west of Fairview. The Wells, Webster, Douglas, and Horton families were ministered to by J. R. Goodenough, a Church minister who came and filed a land claim in 1896. He ministered until his death in 1912.

In 1889, another minister of the Church came to the area, S. S. Davison, who ministered until his death in 1930. He also was an early leader in the Church of God (Seventh Day). Another early Church leader and minister from Nebraska, L. L. Presler, father and grandfather of early members, also conducted services for the early Fairview church.

In 1900, other Davison families and their relatives, the Robinson and Sheffield families, moved to the territory from Iowa. More land opportunities became available for a time after the run as some failed to meet the requirements for keeping their claims or sold their claims. Pioneer life was hard and not for everyone. Wells, Davison, and Miller names were on the document. The Oklahoma Conference is still thriving and active in leadership of the Oklahoma churches (including Fort Smith, Arkansas), the Dover Family Camp, and in the work of the Southwest District.

The Fairview church group began looking for a church building, and on March 10, 1921, they purchased their present church building from the Mennonite Brethren Church for $1,000. From 1906 to 1912 the building (built around 1900) was owned by the Central Christian Church, which had moved it from a rural community south of Fairview.

Since 1906 the building has been at the same location — on the corner of 7th and Ash Street in Fairview, and for the past 100 years the Fairview Church of God (Seventh Day) has owned and enjoyed this building at the same location. The land was part of the John A. Floyd homestead and became part of the town of Fairview, which the Bowers brothers started with one small store, stocked with the wagon loads of supplies brought in from Enid, Oklahoma, for the homesteaders. Today it is a modern s

In 1948, the Fairview church was host to over 60 ministers from all over the country who attended the unity meeting of Stanberry, Missouri and Salem, West Virginia Church of God (Seventh Day) Conferences. The business meetings were held at the Fairview City Auditorium. The unity meeting was successful. In 1949, the groups merged and in 1950 moved the headquarters of the Church of God (Seventh Day) to Denver, Colorado. Headquarters are still in Denver and a number of years ago, a new facility was built to house the Church offices, publishing, and ministerial training departments.

In preparation for the unity meeting, the Fairview church made several major upgrades to their building, including adding a full basement and bathrooms. A new level floor was installed, replacing the slanted floor and with a stage built at the opposite end from the entrance. Those who came late appreciated this improvement. A multi-level foyer wing and more bathrooms were added years later, but the original sanctuary space is the same as it was 100 years ago.

Each generation has added its decor and special touches, and upkeep to this historic building without disturbing the original structure. The bell that rang from the belfry has for many years graced the corner in front of the church. A church sign has been attached to the bell and has become a landmark for the Church of God (Seventh Day) in Fairview. Many photos have been taken in front of the church sign and historic bell. Our parents tell of ringing the bell on Sabbath morning. The chimes could be heard all over town and all the way to their country homes.

Generations of Church of God folks from families who homesteaded in the Cherokee Strip and had roots in the Fairview church now reside all over the country. Many Church ministers and student ministers have served at the Fairview church. We are grateful for the dedicated people who came our way, lived and shared their faith and beliefs, and left us with standards to uphold. Some of the ministers who served the Fairview church through the years: A. Craig, C. Adams, C. Faubion, R. Marrs, Hawkins (Haskell and Enis), F. Walker, L. Hadden, K. Knoll, R. Sanders, Burrell (Calvin, Ivan, Denis, and Titus). O.T. Whitten and K. C. Walker were the traveling evangelists. When there was no minister, we were blessed with tapes and video messages.

Much of the early church history was recorded by Roy Wells and Pastor Clayton Faubion around 1950. Each generation has added their memories. Around the turn of the century when the land run brought folks here, farming and land were the attractions for this rural community. It is sad that our rural community does not now retain more folks after they are grown and educated. These people move on to bigger cities and more job opportunities. Such is the life for small rural towns.

Today in 2021 our congregation is small and currently without a regular pastor, but our time together is special and led by lay leaders. At 10:00 on Sabbath morning we enjoy plenty of time for Bible study from the church quarterlies, with good discussion, lots of singing, praying together, testimonies, and occasional meals together. We have guest speakers as schedules permit. We have recently welcomed two new families with children and also share our building.

Changes in the membership and to the church building have been made through the years, but the gospel that the congregation studies on Sabbath morning is the Word of the never changing God. God is Good, all the time. He will never leave us or forsake us.

• Established in 1894 after the Cherokee Strip Land Run

• Continuous operation for the past 127 years

at the same location on the corner of 7th and Ash Street in Fairview, Oklahoma 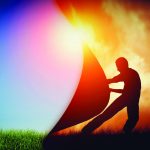